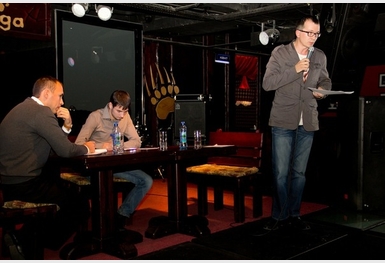 GOLOS has returned to the institution of city management to convince the public that it is harmful.

GOLOS has returned to the institution of city management to convince the public that it is harmful. GOLOS Irkutsk has repeatedly engaged the topic of city managers. Earlier this summer, the media group “Argumenty I fakty” (Arguments and Facts) held a special conference with the City Manager of Angarsk Municipality Anton Medco, and former Speaker of the Regional Assembly Professor Sergei Shishkin, both of whom are experts on politics in Irkutsk. GOLOS’s position on the issue was unequivocal: City managers kill local democracy.
Discourse-Club, a regional-level organization in Irkutsk which held conferences with GOLOS during spring on human rights and debated the introduction of human rights courses into the local school curriculums which earned it praise from representatives of the Irkutsk region has launched a new debate session called “City Manager: Benefit or Harm?”. Participating in the debate is Pavel Berezovsky, a deputy of the Youth Parliament of Irkutsk and the regional coordinator of GOLOS, Alexei Petrov, who are defending and attacking the institution of city managers, respectively.
Without going into the details of the entire debate, the only people present who recognized Berezovsky as the winner of the debate were Anatoly Sayansh Trukhina (ex-Mayor of Irkutsk, twice elected) and Maksim Shmakotina, a coordinator of United Russia’s youth wing.
After the debate, the audience voted and expressed their opinions on the institution of city managers. The majority of the audience was of the opinion that in fact city managers do more harm than good.