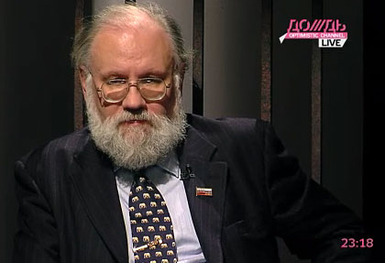 In the interview, Mr. Churov denied that the Organization for Cooperation and Security in Europe (OSCE) had requested that it be allowed to bring a larger number of election observers than the current 200 that have been agreed to. Reports on both the OSCE and CEC websites clearly indicate that initially the OSCE wanted 260 observers.

“If the Chairman of the CEC allows himself to be so openly careless with the facts, contradicting figures his own organization has admitted to and that an influential international organization has published, how can we expect any accuracy with regard to the administration and oversight of Russian elections?” stated Lilia shibanova, executive director of Golos. “An earlier report on the CEC website even suggested, erroneously, that Golos is not a legally registered entity.

Mr. Churov’s remarks came during an interview on Rain TV on 18 October in which he stated “Do you really think that we are respected leaders of the OSCE trading as the market? No. You are in my remarks had not seen any figures that prompt, which I signed, and there is no numbers … Officially, we, of course, nothing has been received and could not do.

According to a report posted on the OSCE website, the OSCE/ODIHR ambassador said that “the OSCE is ready to send a mission to monitor the elections, which includes a core group of experts, as well as 60 long-term and 200 short term observers to monitor elections …. "

On the CEC website the same is stated in translation of OSCE/ODIHR pre-election report.

Golos Association, a registered media organization, is currently conducting long term elction observation in 48 regions and will be monitoring the elections on December 4 in 40 regions with over 2000 correspondents.

“These recent inaccuracies coming from the CEC make our observation efforts all that more vital to the promotion of free, fair and transparent elections in our country,” Shibanova added.

Statement of Golos Association on
Comments by CEC Chairman Churov

As Russia’s leading independent election monitoring media organization, we are dedicated to insuring that elections in Russia are conducted fairly, transparently and honestly—that every vote counts and that all votes are accurately counted. That is our mission for the upcoming State Duma elections on December 4 and the reason we will deploy over 2000 correspondents to observe voting in 40 regions. We want to see that Russian citizens have the opportunity to experience an election as free of violations as possible.

We are concerned, therefore, by recent comments made by the Chairmen of the Central Election Commission, Vladimir Churov, regarding the number of election observers requested by the Organization of Cooperation and Security in Europe to be allowed to monitor the State Duma elections. In comments made on Rain TV on October 18, Mr. Churov denied that there had been a request by OSCE for a contingent of observers larger than the 200 that are presently planned and added that there had been no negotiations with OSCE over this number.

Articles posted on the OSCE website and even on the CEC website clearly state that the initial request for OSCE observers was for 60 long term observation and 200 for election day observation. Moreover, in earlier reports on their website, the CEC has even suggested that Golos Association is a not legally registered entity. All of these statements are at odds with the facts as reported by various news media and our legal filings as an organization.

In theory, Golos Association and the Central Election Commission share the same goal of preserving the integrity of the election process and insuring the accuracy of vote counting. However, if the CEC can be so in error on the simple fact of whether Golos is a legally registered organization and the chairman so equivocal about whether the OSCE had requested a larger number of observers for their observation mission, it raises a concern on our part of how much accuracy can be expected from the CEC in counting the votes and preserving integrity of the process on Election Day