2011 Parliamentary Elections in Russia: GOLOS and European Exchange report on the domestic election monitoring in Russia 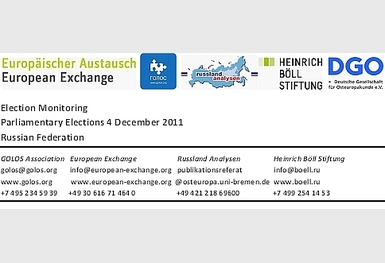 European Exchange and the Russian election monitoring organisation GOLOS are launching regular coverage of the election campaign. In the coming three months, election monitoring reports by GOLOS and expert’s opinions will be published fortnightly as a special category of the Russland Analysen (Russia Analyses), the Russian Analytical Digest and distributed via this online newsletter to an interested public. The coverage is supported by the German Association for East European Studies DGO and the Heinrich Boell Foundation.

The GOLOS experts, Arkadiy Lyubarev and Alexander Kynev, analyse the electoral legislation last changed in July 2011 and the effects of guided democracy on the internal state of the Russian parties. Jens Siegert, head of the Heinrich Boell Foundation in Moscow, addresses the question of the function of the Parliamentary Elections in the political system of today’s Russia.

Since 1st September 2011, GOLOS has already been carrying out long-term observation of all stages of the election process in 48 regions of the Russian Federation. This will run from the registration of the parties and their candidates, cover the entire election campaign period and extend right through to the voting and vote-counting processes. During the election campaign, a media centre founded by GOLOS will monitor and evaluate campaigning in the media. Additionally, on election day over 2500 short-term election observers will look to follow the voting and vote-counting processes in the election precincts.