Spokes in the Wheel During the Collection of Signatures 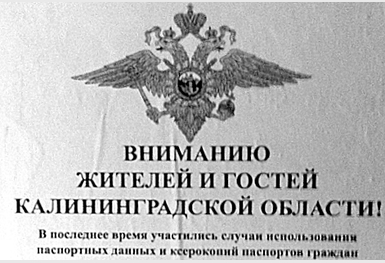 Earlier this week, strange leaflets began appearing on the streets of Kaliningrad.

The author, on behalf of the police department, kindly asked people to not give their passport details to strangers in order to avoid fraud. Fraudsters, according to police, could come in the forms of social workers, community services, and more interestingly, people who are collecting signatures, who then allegedly turn them over to apply for false loans.
They also stated that the liability of fraud lies with the victim, and that they should report all cases to the police.

It should be noted that some opposition parties, if they wish to participate, must collect signatures in accordance with electoral law to run in elections. To confirm these signatures however, the signer must provide their passport information, which is carefully checked by election commissions during the registration process. Without this data, the party is effectively denied the right to participate in the election.
It is believed the ruling party is involved, and is practicing new methods of getting rid of the opposition.