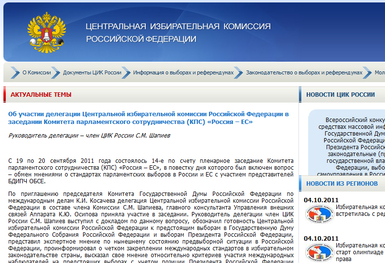 At the 14th session of the EU-Russia Parliamentary Cooperation Committee (PCC) held late in September in Warsaw, the Russian side addressed the confidence of information provided during the meeting with representatives from GOLOS on the topic of freedom of media and the use of administrative resources during the election period. The EU had no response to the Russia when they stated GOLOS was not officially registered, and the information is available has been posted on the CEC’s website and cited by the Kommersant Online.
GOLOS’ Executive Director Lilia Shibanova addressed the issue in a letter today, stating “Association GOLOS is a legal entity registered in accordance with Russian legislation. The letter was sent to the co-chairs of the sessions, A. Klimovu and K. Fleckenstein, and addressed the concern that inaccurate information was disseminated by the Russian authorities during the event.
GOLOS appreciated the fact that the information was removed from the site the as soon as the mistake became obvious. GOLOS is willing to accept the error as an unfortunate misunderstanding and underlines its readiness to cooperate with all parties in order to make the coming elections as fair and transparent as possible.