The map of the country on the interactive hotline at www.kartanarusheniy.ru is gradually turning red 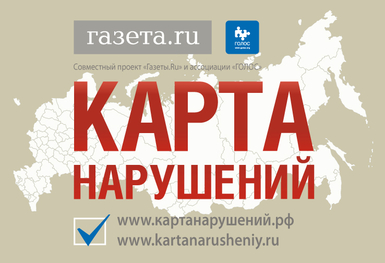 The geography of reported violations already covers the whole territory of Russia — from Kaliningrad to Vladivostok.

President of Yakutia, campaigning for one of the parties, breaks the law with the same ease as the Prime Minister in Moscow. Lower rank officials, from governors to heads of rural settlements, are also campaigning to the extent they are able to: in the Amur region, Irkutsk, Ivanovo; in Vologda, Vladimir or Chelyabinsk.

Generally speaking, any limitation on the free execution of citizen’s electoral rights is not just a violation of law, but a criminal case. But no such case has ever been open in the Russian Federation yet.

Many citizens are complaining that officials are coercing them to vote or to obtain absentee ballots. In general, it happens to employees of the public sector. Sometimes their supervisors urge them to swear allegiance to one political party that contradicts to the constitutional right to freedom of conscience and belief (as it happened with the employees of the detention facility in Kudymkar, Perm oblast).

Electoral commissions are not acting upon that, reasoning that these officials are entitled do so while being ‘out of duty’. For example, when Vladimir Putin was interviewed by the three national television channels, he was standing for public office. But let’s imagine, that he had arrived at Ostankino as a regular man, and the by chance the three channels’ directors just happened to be there, and that they decided on an impulse to interview an ordinary person from the street.

As it was before, there are numerous posts to the map about administrators at all levels helping to organize our free (that is what the Constitution states) elections. For example, there are reports on how these administrators use their office to disguise their campaigning efforts under a voter-education campaign to endorse certain parties and to obstruct campaigning of others.

Characteristically, most of the reports relate to one of the political parties contesting for seats in the State Duma. But the reports also indicate that two types of violations are evenly distributed between all actors: — “black PR” and “voters’ bribery”. “Black PR” is about evenly divided between United Russia, the Communists and Fair Russia. All parties except Yabloko and Patriots of Russia are accused of bribing of voters.

Sometimes that leads to quite funny things: according the post # 307 Liberal Democrats in the Voronezh region had been forced to bribe voters. In the black PR race, this time succeeded mud-slingers of the Communist Party, who took to the street in Saratov with a banner saying: "There’s no God! Vote for the Communist Party! ".

There are also reports, which do not fall into any pattern so far. The organization under the name Fair Choice, once again has demonstrated where it originates from. In Lipetsk, two “unidentified persons” have tried to attack (though unsuccessfully) United Russia’s campaign headquarters. So called Public Council of Fair Choice in Lipetsk has instantly singled out with outrage this incident as a brutal intimidation of United Russia’s staff. But the same organization turned a blind eye when the police blocked the headquarters of the Communist Party and detained its campaign workers in Tver. The reports of pressure on a media editor in Novosibirsk and on a State Duma candidate in the Moscow region are also of serious concern.

In Tula they used an interesting technique to collect personal data about voters. Voters are requested to complete a questionnaire with the logo of United Russia titled “The governor should know.” The small print on the form reads: “I hereby give my consent to the Tula regional branch of United Russia to process my personal data for the purpose of informing me about activities of the regional branch and the outcome of my complaints’ review for a period of three years. I grant my consent for any processing of my personal data under the existing legislation.” Now Tula residents can stay assured that their personal data will be legally used by United Russia.

But are there violation reports on the map, indicating violations by other participants of the electoral process besides United Russia? Of course there are. For example, in the report # 249, а media representative informed us about a campaign event of the Communist Party disguised as a concert.

How the reports end up on the map? Our moderators sort out only those messages that relate to the Dec.4 elections. And the majority of violation reports are not necessarily related to United Russia but rather to the efforts of the executive branch attempting to assist one of the participants of the election. These efforts are so persistent that it becomes clear that the executive power was and still is a major, although not registered, participants of the electoral process, being at the same time its organizer.

We received a report from Rybinsk, the Yaroslavl region, confirming the common practice of the establishment of precinct electoral commissions. By law, precinct election commissions should be established by their higher-level commission, but in reality its members are hand-picked by local governments. The report from Rybinsk indicates that heads of administration of rural settlements are asked to “conduct a personal analysis of the membership of the PECs to determine the effectiveness of interaction with their specific individual members during the election campaign.” If the report is trustworthy, the main criterion for the efficiency of interaction with a specific member of the commission is the “loyalty to the Party.” The Party is not specified, but apparently, there is no second thought about this. The instructions letter is mentioning the need for close cooperation in the process of the establishment of precinct electoral commissions with the local electoral Headquarters (which Headquarters this should be is not specified either).

Article 141, part 3 of the Criminal Code clearly prohibits any interference with any electoral commissions by any office holder as well as any demands or instruction to electoral commissions from such officials on matters within the exclusive competence of this electoral commission; the sanctions for this violations varies from a fine from 100 to 300 thousand rubles and up to 4 years of imprisonment… If this Article is properly enforced one half of this country’s officials should have already been prosecuted.

A very indicative video was sent from the Kemerovo region. The Mayor of Novokuznetsk is caught speaking to business leaders of the city. “The goal is clear: United Russia must win”, — said the Mayor. Meanwhile, the Mayor is both a local government, a municipal employee, and an elected public official. Article 11.5 of the Administrative Code prohibits any campaigning in their working hours to such office holders. But a common trick was devised to ward off allegations in such cases: after it becomes public it turns out that the mayor was “out of duty”: whether on vacation or on lunch break. Watch the video to follow up the investigation of this well-documented case of violation of the law.

In the Omsk region heads of public health care institutions were given specific instructions from their supervisors on how they should cooperate with one of the participants in the elections. In Murmansk, a company involved in outdoor advertising turned down a client who had booked some advertisement space to be used by the end of the year, “looking forward to understanding” from the client without mentioning that the advertising space was urgently requested by the headquarters of a major party “to advertise public services”. In Altai one head of local administration is discouraging its rank and file employees from participating in the campaign in their free time, while in Samara school principals are instructed to withhold school facilities for meetings with voters.

In Stavropol, the Russian Post Service is distributing campaign materials of one of the parties free of charge. This is a rather
common abuse of public resources when this public service is used to deliver canvassing letters to voters. However, after the Russian Post Service joined the All-Russian National Front led by Prime Minister Vladimir Putin, this is likely to be interpreted as a voluntary participation of postmen in campaign event. It looks pretty much the same as a voluntary purchase of government bonds in the Stalin era. However, the All-Russian National Front is currently participating in the campaign to a significantly lesser extent, than it was expected earlier. Perhaps, the Kremlin’s spin doctors have realized that there is a difference in effectiveness between classic political campaigning methods and our sovereign homemade administrative resource. These two compete one against the other like a fan against a crowbar, or a gun against a tank.

The Map of Violations confirms the abuse of several commonly used techniques, such as campaigning under the guise of telephone polls, involvement of social workers in their office hours into the campaign and into illegal compilation of lists of voters for mobile voting on election day.
Having read all this, one can certainly ask: “Do these reports relate only to public office holders and party election headquarters?” But wait; here is a wonderful report from the progressive Kirov region: a reporter “was barred from taking photos and video, as well as from audio recording” at a session of the regional electoral commissions. According to the Chairman, “photos and video recordings are permitted to journalists on election day only.” This report is good evidence that electoral commissions are also involved in organizing of these elections.