The first Statement of GOLOS Association on the results of long-term monitoring of election campaigns at the local, regional and State Duma elections set for December 4, 2011. The Registration and Nomination Stages 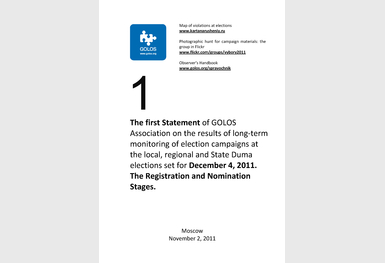 This is the first in a series of statements on the course of the election campaign. It covers the period from August 30, 2011 through October 25, 2011.

GOLOS Association conducts independent long-term monitoring of elections. The monitoring is performed by 48 specially trained long-term observers, correspondents of Grazhdanskiy Golos newspaper, and activists in the Association. GOLOS obtains information from mass media, expert interviews with representatives of political parties, NPO leaders, members of electoral commissions, as well as from citizens who report violations in the course of campaigns – both to GOLOS representatives in person and through the ‘Map of violations at elections’, a joint project of GOLOS Association and the Internet news site Gazeta.Ru.

In its monitoring efforts, the Association concentrates primarily on the following aspects of the electoral process:
1. Observation of citizens’ voting rights and electoral procedures;
2. Electoral commissions’ activities;
3. The use of administrative resources in election campaigns;
4. Ensuring equal opportunities for candidates’ and political parties’ election csmpaigns;
5. Compliance with the procedures of voting, tallying, and announcing results.

GOLOS Association will also issue an analytical report on the elections, in which it will sum up and analyze all available documents and materials. Special attention will be paid to violations of the principles of free and democratic elections at all stages of the election campaign. GOLOS reports on the results of previous elections can be read at http://www.golos.org/elections.