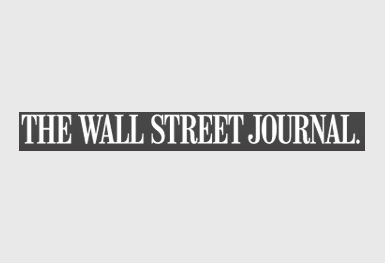 Dmitri Surnin went to sleep the night of Russia’s parliamentary election thinking he had done his part to keep it honest.

His heart sank the next morning. Overnight, according to Russia’s official election website, the party’s tally at the precinct had shot up by 391 votes. “I read it and felt like an idiot,” the 37-year-old editor said in an interview.

Mr. Surnin’s story, told in his weekly newspaper and on Facebook, was one of many accounts of vote-rigging in the Dec. 4 election that spurred the largest anti-Kremlin demonstrations in two decades. Mindful of Mr. Putin’s suggestion that protesters take their complaints to court, the editor also told it to a judge. 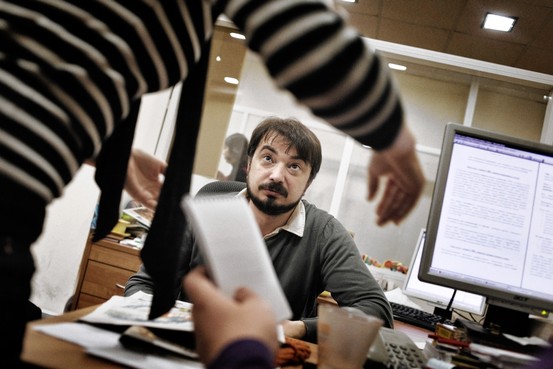 The judge has ruled in favor of Mr. Putin’s United Russia party. So have courts hearing at least 21 other vote fraud allegations since the election. Even as the Kremlin’s critics prepare more cases, the initial rulings have reinforced a view that the effort is futile.

“The court system is completely manipulated, but these cases matter,” said Alexei Zakharov, a member of the independent election-monitoring group Citizen Observer. «Each court challenge that fails will simply make clearer the need to bring civic pressure against the authorities—pressure in the streets.”

Opposition forces are planning a new demonstration Feb. 4 to push for annulment of the election, a new vote and broad political changes.

They are also rallying against a bid by Mr. Putin, Russia’s dominant leader for 12 years, to return to the presidency in an election March 4.

Their campaign to prevent fraud in that election received a setback Tuesday when electoral officials said Yabloko, a liberal opposition party, had failed to gather enough signatures to put its leader, Grigory Yavlinsky, on the ballot, making it ineligible to place observers at polling places.

Also on Tuesday, Golos, an independent group that monitors elections, said it had been ordered to vacate its Moscow office in March, a move it called a pressure tactic.

Mr. Putin has rejected a rerun of the disputed December balloting, in which United Russia lost ground but claimed 49.32% of the vote against six rivals and a narrow majority in Parliament. 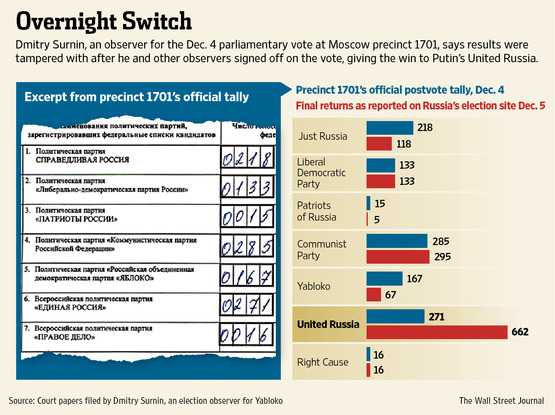 “It’s quite obvious that if we take account of those troubled cases, cases that are under investigation, they would not exceed more than half a percent of all the votes at the balloting stations,” said Dmitry Peskov, the prime minister’s spokesman.

Opposition parties and independent monitors say vote falsification, the most demonstrable of multiple irregularities that marred the election, was far more extensive.

Citizen Observer monitored a representative sample of 155 Moscow precincts and collected the protocols, the handwritten documents signed by and distributed to precinct officials and observers to certify the count.

The group said United Russia’s final official vote totals from 21 precincts were higher, by as much as 20%, than those originally shown on their protocols.

At Moscow precincts where protocols matched official results, United Russia got 26% of the vote, the monitoring group said, compared with 46% in the city’s overall official count.

At least 193 court challenges have been filed by political parties and individuals such as Mr. Surnin, who served as an observer for the Yabloko party but isn’t a member. Hundreds more cases are being prepared, opposition leaders say. But because of limited funds for legal fees and demands of the presidential race, they say, these cases could take months to submit and resolve.

Meanwhile, federal courts have tossed out the initial round of challenges, which were based on wide discrepancies between protocol vote totals and official returns.

In many cases, judges rejected observers’ copies of protocols as evidence, citing small errors in the way they were signed and stamped after being duplicated and distributed at voting precincts.

Faced with properly executed protocol copies that showed low vote totals for United Russia, two Moscow courts accepted an argument by election officials for ignoring them: They were misplaced samples used for “training purposes,” not the real thing.

“A court will believe anything the election officials think up,” said Arkady Lyubarev, an official at Golos. “They’re very creative.”

Mr. Surnin, the newspaper editor, went to court with his copy of the precinct 1701 protocol and an intriguing account of what happened to the original in the midnight hours after it was compiled.

Lyudmila Golka, head of the precinct election board, was required to hand the original to the regional election commission. But she took it first to City Hall’s prefect in the district, Oleg Vorona, and lingered in his office, according to Andrei Koptev, an election observer who confronted the pair in the hallway at 1 a.m. and was escorted by police from the building.

Mr. Surnin and Mr. Koptev, one of five witnesses backing the editor’s complaint, allege that the protocol was doctored at that meeting, reversing United Russia’s defeat at precinct 1701 and violating the rights of its voters.

Ms. Golka wouldn’t comment, a sister said, explaining that the election-board head’s official duties had ended with the vote count. An aide to Mr. Vorona said he was unavailable.

Judge Yelena Buluchevskaya overlooked Mr. Surnin’s documents and addressed only the question of whether the editor could claim a violation of voting rights in the precinct. Because he wasn’t registered to vote there, she ruled, he had no case. Asked for comment, a court spokesman said the ruling speaks for itself.

Mr. Surnin then took his case to the prosecutor general’s office, which has promised to investigate about 300 such complaints.

“I’m going to take this as far as I can,” Mr. Surnin said, describing his first election-watchdog experience as part of a watershed event.

He said his articles in Moi Rayon, his newspaper, have prompted a dozen readers to ask how they can sign up to monitor future elections.

“What’s changing in Russia is the number and kind of people who want to be observers,” he said. “It’s people with phones that can make videos, people with cameras. More people want to take responsibility to prevent the theft of our votes.”