First statement of the Association GOLOS on the results of the long-term election monitoring of the local elections and the presidential elections which are scheduled for 4th March 2012. 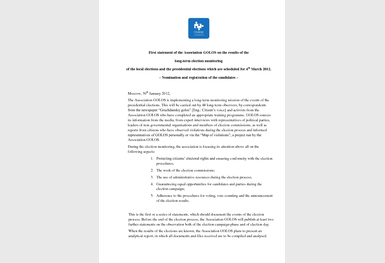 Nomination and registration of the candidates

Moscow, 30th January 2012,
The Association GOLOS is implementing a long-term monitoring mission of the events of the presidential elections. This will be carried out by 48 long-term observers, by correspondents from the newspaper “Grazhdanskij golos” [Eng.: Citizen’s voice] and activists from the Association GOLOS who have completed an appropriate training programme. GOLOS sources its information from the media, from expert interviews with representatives of political parties, leaders of non-governmental organisations and members of election commissions, as well as reports from citizens who have observed violations during the election process and informed representatives of GOLOS personally or via the “Map of violations”, a project run by the Association GOLOS.
During the election monitoring, the association is focusing its attention above all on the following aspects: