The election campaign during the Russian presidential elections: In the battle between the regime and society, it was the new year holidays which were victorious

The presidential elections in March 2012 differed considerably from both the 2008 presidential campaign and from the most recent Duma elections. Public political activity briefly returned to the Russia political sphere, primarily on the streets in the form of wide-spread protests. The media reacted naturally to the new (conveniently forgotten past) political realities. This short-term revival fundamentally changed the course of the election campaign in the media. With the onset of the presidential election campaign in the new year, the political activities transferred from the streets back to the media. The Association GOLOS noted an increase in the level of campaigning on television, in the newspapers and on the internet. At the same time, GOLOS experts in the regions recorded a stark reduction in the use of other campaign tools, including outdoor campaigning using billboards or with traditional flyers.

The data below show the results of the media monitoring which the Association GOLOS carried out with the help of data provided by the company “Medialogiya”. Additionally, the reader’s attention is drawn to some characteristic trends in the reporting on the candidates and the opposition before and during the election campaign.

Media intensity of the election campaign and disproportional reporting

The media campaign, which was entirely geared towards the election of the main candidate as President of Russia, began long before the official start of the election campaign period on 4th February and continued up until literally the last minute when campaigning was officially allowed. Even during the break in campaigning on 3rd March, which is supposed to allow voters to make a calm decision, 131 reports were published which mentioned the main candidate for the post of president.

The intense increase in the frequency of mentions of the future candidates, particularly of Vladimir Putin, began immediately following the new year holiday period. By comparison, here are the results of our campaign monitoring from 2008, where the elections were far more dubious in terms of transparency and, furthermore, were of far less interest to the media. 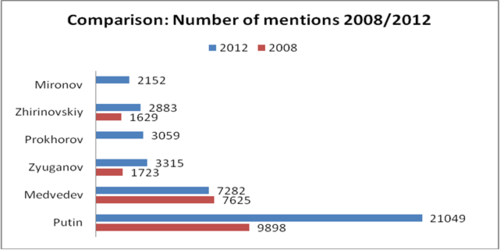 (Number of mentions in the media channels: TV and press (newspapers and magazines)

In 2008 there were far fewer mentions in the media of the main candidate Medvedev than this year for Vladimir Putin (this year saw 20,189 mentions for Putin in the press and television compared with 7,625 mentions for Medvedev in 2008).

Regarding the remaining presidential candidates, the situation in 2012 fully reflected that of the 2008 presidential elections. Particularly striking was the imbalance between the candidate in power and the remaining candidates. Even if, due to the overall increase in mentions, the number of media reports on the other candidates also rose, this failed to provide any reduction in the imbalance in reporting, but rather strengthened it: the number of mentions of the remaining candidates was five to six times lower than for the main candidate. Just using this simple figure – the number of mentions – one can clearly see the enormous discrepancy in the reporting: 134,033 mentions for Vladimir Putin compared to 24,476 mentions for the “second-placed” candidate Mikhail Prokhorov (in all media channels). This discrepancy could be observed both at national and regional level.

The media intensity of the election campaign and the imbalance in the frequency of media reports for each candidate described above is primarily down to the fact that, for the first time in the history of Russian presidential elections, one of the candidates was incumbent prime minister and that he did not suspend the official activities of his post during the election campaign. Therefore, a wide-spread media campaign under the guise of reporting on the “everyday work” of the main candidate could be observed. GOLOS registered numerous articles on Putin’s activities, which were allegedly directly related to the duties of his office, but which inevitably formed part of the election media campaign. A strict differentiation determining which reports were political campaigning and which were not was, therefore, all but impossible. At the same time, given Vladimir Putin’s increasing media ranking, the level of the remaining candidates diminished in the diagram to an almost invisible line, which hardly scrapes above zero throughout the various phases of the election campaign.

Let us now look at another analysis value: the qualitative representation index, which shows to which extent the activities of the candidates are being presented positively in the media. The figure Vladimir Putin is primarily portrayed in a neutral light, which can be explained by Putin’s refusal to suspend his official activities during the election campaign. The election campaign did play a “back-seat” role in the reporting, but it was nevertheless conducted on an extremely wide-spread scale. It was therefore virtually impossible to identify open campaigning, particularly on behalf of the main candidate. 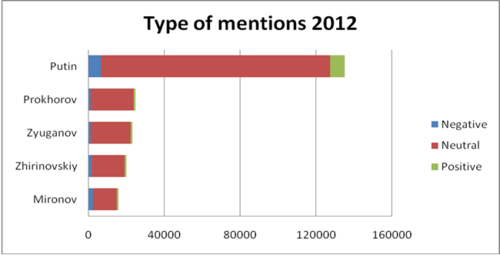 An analysis of the qualitative representation index also provides evidence that the election campaign did not begin on 4th February, but as early as 4th January, when all media awoke from the traditional new year hibernation; from that point onwards, a consistent rise in the qualitative representation index for the figure Vladimir Putin can be seen. 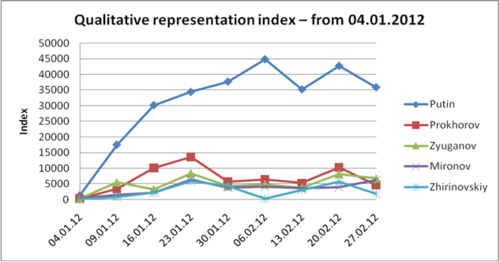 At the start of December 2011, there were wide-spread protest activities in Russia against the enormous irregularities observed at the Duma elections. As a result of the protest rallies bringing together opposition powers, several civil movements were founded, such as the “League of Voters”. Media activity can be divided into two phases during the period from 4th November 2011 to 4th March 2012, in which the reporting in the media saw a diametric shift: The first phase ran from 4.11. until the end of the year and the second from the end of the holidays until election day. If before the end of the year the events related to the increased opposition activity and the citizens’ protest actions following the elections were still being actively reported on, the situation changed completely in the new year.

Before the turn of the year, Putin’s qualitative representation index dropped dramatically following the protest actions, whilst the frequency of mentions for Navalnyj and Kudrin constantly rose due to the demonstrations. In the new year, this changed fundamentally: What was shown in the media no longer had any connection to the events on the streets. This meant that a “split” could be observed in the political realities. On one side stood the “offline” politics of the protesting activists and the observers of civil society movements. On the other side, there was the censored reporting in the media, which presented the official line and which had scarcely any relation to the citizens’ civic protest. 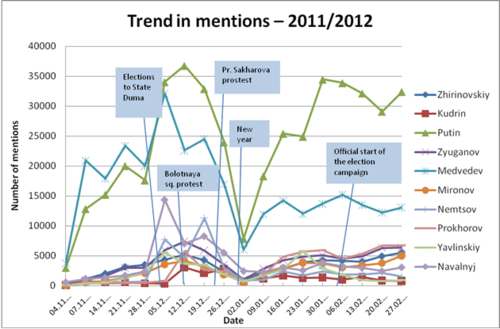 It was the holiday period around the turn of the year and the resulting “radio silence” which made such a divide between real and media politics possible. The public which was so troubled by the events of December had, for a time, its attention turned away from the political events and concentrated on preparations for the holiday season. After new year’s day, there was a ten-day “non-transmission period”, during which the media did not deal with any political topics.

We therefore experienced a qualitatively different cross-section of the media sphere in the new year, which can be described as “officially favourable”. The government had clearly regained control over the informational situation and taken up a dominant position in the media sphere. Looking at the positive mentions for Mikhail Prokhorov, for example, the highest values can be seen in December, whilst during the election campaign a slight positive trend in his values is only noticeable towards the end of the campaigning period. After the new year, it was not just the number of mentions but also the type of reporting which point to Putin’s total dominance. In the period from new year’s day to election day, the qualitative representation index for Putin was many times higher than that of all other candidates. Similarly, it could be seen from new year’s day onwards that Putin finally took over from Medvedev as first placed figure in the media. The latter is slowly but surely exiting from the media stage and has, since the turn of the year, been gradually losing the character of a media figure. 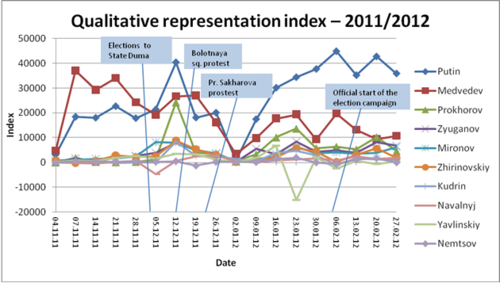 How does the media sphere in Russia look today? About the same as it looked after the elections in 2008. The short phase in December 2011, when real politics found their way onto our screens, is over. A media revolution did not take place. During the ten day new year holiday period, the media sphere could be promptly and purposefully reformatted and set up to serve the goals of the election campaign. Remarkably, the negative feeling which could be observed in December towards the ruling party “United Russia”, which was visible in the media – even in the Putin-friendly media – failed to have an effect on the opinion poll levels for the main candidate nominated by this party. At this point, the general weak nature of the media as an institution should also be noted. For all the interesting insights which a media analysis can provide, it would be an illusion to assume that the media in Russia today played an essential, independent part in the political process.

Translation: Stephen Bench-Capon
The present text is a result of the cooperation between the Russian NGO “The Association of Non-Profit Organizations ‘In Defense of Voters’ Rights’ GOLOS” and the European Exchange in Berlin for the purpose of observing the Russian Duma elections 2011, supported by the German Association for East European Studies (DGO) and the Heinrich Böll Foundation.