The presidential and municipal elections in Moscow: comparing protocols

As has been the case each time I have drawn a comparison—in 2004, 2008, and now—comparing the protocols indicated that about three-quarters of Moscow’s electoral commissions either failed to comply precisely with their legal requirements, or simply falsified the results during the counting process. The fact is, the data in the protocols for the two different elections—which were held simultaneously—are connected to each other. But the commissions verify them separately from each other, thus failing to notice (sometimes absurd) differences. Moreover, this absurdity passes through the whole system of electoral commissions in Moscow.

Let’s try and compare the protocols. We can exclude from our analysis all of the “closed” Precinct Electoral Commissions (PECs)—those that were formed in hospitals, boarding houses, and prisons. We will have to do this for two reasons. First, some of the “closed” PECs have not been represented in the summary table of the municipal elections (44 stations,) apparently owing to the fact that they did not hold municipal elections. Second, the rules for the making of lists and the issuance of municipal ballots under Moscow’s electoral code is so poorly regulated that in practice, they are not operating according to the law, but according to the decisions of the district board’s curators. Closed stations that are represented in the summary table for the municipal elections have numbers beginning with 3,200. Among them, is the Military Academy of the Russian Ministry of Defense, in which 1,165 “students” voted in the municipal elections. But it is still a separate issue- a little military cunning traditionally used by the organizers of the elections.

The following image characterizes the deviations of D1 in all of the 3,180 PECs that were examined. For greater visibility, the diagram is cropped from the top. 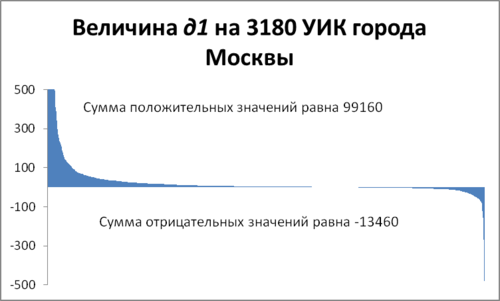 The contrast between this value and zero can be attributed to the following factors:

A) Failure of voters to receive a ballot, although this is extremely rare;

C) Voters using absentee ballots were given two ballots instead of one. In such cases, the value of D1 must be negative;

D) Certain categories of electoral commissions deliberately issued only one ballot. This can occur in cases where commissions had “attached” voters who did not have a place of residence in the given area; for example, if they were employees of nearby businesses. In this case, D1 will be in the positive.

Factors A and B could cause the value of D1 to deviate slightly in one direction or the other. The number of commissions in which D1 deviates from zero by no more than three units is 1,057, taking into account the commissions where the deviation is zero.

A large deviation from D1 in the negative direction suggests that some of the municipal ballots were issued illegally, either by way of absentee ballots or simply by unknown parties. In 57 PECs, this value is 50 or more ballots; in 172 commissions, 20 or more ballots. The total number of points below D1 is 13,460. This number can be understood as an estimate of the number of ballots that were illegally issued (assigned) in the municipal elections. Note that apparently, this was not the only falsification method used in the municipal elections, but more on that in the next post.)

The total value of points above D1 is 99,160. This is the estimated number of voters who had listed Moscow as their temporary place of residence, based either on their work for a company or simply on the basis of “having temporary registration.”

Of course, small deviations of D1 might be the result of simple negligence on behalf of the commissions. Nonetheless, we have given ourselves the liberty of providing estimates of the total value for the simple fact that it is a minimum estimate. The fact is that some PECs were able to issue municipal ballots as well to temporary residents. In this case the value of D1 does not change, but the first and second estimates increased simultaneously.

It should be noted that there were a large number of commissions with high D1 values that cannot have resulted from the commissions’ negligence. At 15 PECs, this value exceeded 1,000. At 45 PECs, it exceeded 500. The latter number—as could have been expected—included 14 of the PECs that we referred to earlier as “mystery” PECs, and all three PECs from which we have information about employees voting during “continuous production,” PEC numbers 3165, 3179, and 3177. In 174 PECs, the number of PEC employees of “continuous cycle” and “temporary residents” exceeded 100 people. This number was already given for 19 of the 24 “mystery” PECs. These 19 “mystery” PECs account for 16% of the total value of points above D1 (15,955 ballots.)

Note that the calculated number of 99,160 is significantly smaller than that estimated for Moscow’s “supplementary lists” (260,000 voters,) which is obtained if we calculate it using different methods. This may be based on two reasons, both of which reveal violations of the law. First, the discrepancy could be a consequence of an illegal overestimation of the number of municipal ballots issued. Second, it could be a consequence of the failure to exclude voters from the lists after having given them absentee ballots. There are known cases of this.

To what extent did the votes of temporary residents impact the election’s results? As correctly noted in Vedomosti, different temporary residents voted differently. The category of temporary residents and, consequently, the supplementary lists included employees other than “continues cycle” workers, as well as students in training programs, and their numbers are quite large. And the percentage of their votes in favor of Putin is lower than the Moscow average.

If we divide Moscow’s PECs into three groups: ordinary, closed, and “mystery,” the mean (average) results for Putin appear to be grouped as follows: 46.8%, 60.8%, and 58.1% respectively. Thus, the closed PECs have an even better turnout for Putin than do the “mystery” PECs, although both of these groups deviate significantly according to this index from Moscow as a whole.

We would like to further note that the supplementary lists did not give the considerable effect that may have been expected of them. Even if we assume that all of the voters from the supplementary lists voted for Putin (which is not the case,) their lack of enrollment would have diminished his results in Moscow from 47% to 45.7%.