In anticipation of the gubernatorial elections: how, where, and when? 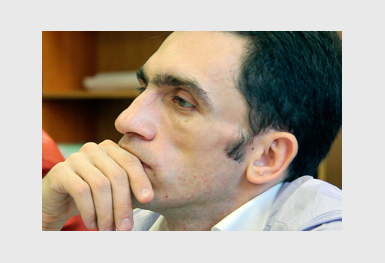 The State Duma is preparing to adopt the second reading of the bill on the return of gubernatorial elections. The process of discussing the amendments to the text, the first reading of which was adopted in extremely general terms on 28 February, is in full swing. It is officially referred to as, “On Amending the Federal Law ‘On General Principals of the Organization of Legislative (Representative) and Executive Bodies of State Authority of the Subjects of the Russian Federation.’"

How will the elections be conducted?

Given the fact that the presidential elections have already passed, and that the risk of the scandalous initiatives of “annoying disgruntled citizens” has been substantially reduced, it is no surprise that the initiatives of public officials are becoming more odious and—if I may say so—increasingly unceremonious. Some members of the Federal Council “in coordination” with the Ministry of Defense are preparing a bill that would require citizens who have reached military age to appear in the military enlistment offices within two weeks of the publication of the presidential decree on conscription. Failure to comply would immediately result in criminal liability. So what can we expect on questions of the formation mechanisms of key authority group, in which the authorities themselves wish to retain the maximum possible means of intervention?

Ideas to strengthen the so-called “presidential filter” were voiced at the Federal Council’s 26 March roundtable: the legislation introduced to the State Duma, it is well known, stemmed from an idea expressed by the prime minister during his “Direct Line,” where he discussed its use as a formal but non-committal mechanism for party consultation with the president. Many experts have met this formulation with surprise and with spiteful interpretations. Now, however, the proposal openly provides the president with the right to reject party candidates submitted for gubernatorial posts, and these candidates—according to the amendments’ authors—will not be able to participate in the elections. At the same time, limitations are posed on the circle of parties who have the right to nominate candidates for gubernatorial positions. Now, it is assumed that this will not include just any party, as in the original bill, but rather only parties represented in the Duma and in regional legislative assemblies. The idea has also been proposed to include, “those deputies who have at least one quarter of the municipalities of a region,” but this idea will not increase the number of recipients with the right to nominate gubernatorial candidates, as currently there are no parties without representation in the relevant legislatures that meets these qualifications.

According to the original text of the bill, all more specific items (the number of signatures required for registration, the procedure for determining the winner of the election, etc.) are governed by the laws of the given federal subject. Establishing restrictions on the number of signatures for self-registration and the self-nomination procedures will be extremely difficult. So it has been proposed that candidates collect the signatures of of 5% of the number of voters in a given region. To be clear: the active federal legislation does not give the regions the right to establish registration requirements for candidates of this or any governing body that would require candidates to gather the signatures of more than 2% of the voters of a given territory. At the same time, the idea to establishment of absurd signature requirements for gubernatorial candidates is in clear contradiction to the meaning of the text and to the spirit of the other presidential bill on reducing the number of signatures required for candidate registration at elections of all levels. In this other bill, a maximum threshold was set for signature requirements at regional and local levels. This threshold is 0.5% of the total population of a given electoral district.

It is impossible to say at this point which version of the bill will become law. And in any case, a revision will be necessary of the framework of the law “On Basic Guarantees of Electoral Rights and the Right of Russian Citizens to Participate in a Referendum,” which specifies the general framework for regional electoral procedures. A prospective change to the text of this law has not yet been published, even in draft form. Still, the bill on introducing gubernatorial elections refers to this law.

It is understood that officials want to dilute the content and meaning of the forthcoming gubernatorial elections as much as possible. In fact, there have been efforts to turn them into referenda for pre-determined candidates. And this fight for the dilution moves to the very brink of rationality, and fails to consider the public consequences of these proposed restrictions. In essence, the amendments’ authors both consciously and unconsciously programmed the development of new scandals and regional political crises. Remember once again—the direct approval of candidates by the president or an even more strict form of filtration—it is in fact an attempt to vest the president with personal responsibility for all of the most contentious and scandalous decisions on refusing to permit either popular but “undesirable” candidates, or candidates from undesirable parties to participate in the elections. The supreme authority in the country has always distanced itself from unpopular and scandalous decisions by symbolically passing responsibility for such decisions to ordinary ministers. The famous principle of “good czar, bad nobles” has always served as a lightening conductor for political power. The more graceful, less scandalous trap against undesirable candidates is featured in the legislation—not to mention informal practice—and this is sufficient. So it remains unclear why such crude and scandalous mechanisms should be introduced. It is either an example of administrative zeal beyond reason, or it is a deliberate effort to make the situation absurd, guided by the principle, “the worse, the better.”

But in any case, there is no question that the diluted version of the bill on gubernatorial elections with all of the possible filters and other “insurance mechanisms” for the authorities will be adopted. This means that even if there are elections, the procedures will make them more closely resemble referenda. The governors and gubernatorial candidates will rely on the votes of citizens, which will radically change the whole system of incentives in their relations with the community and society. In turn, this will automatically influence their approach to decision-making and their consideration of the views of voters. After all, even in the most bizarre elections citizens will vote against blatantly unacceptable candidates, and thus the personnel selection in the federal center will have to change.

The forthcoming gubernatorial elections have already created within the regional elite a wave of expectation and an apparent movement toward the revival of local political life. Potential candidates have already been discussed and have appeared ambitious. Public opinions have been studied by way of informal consultations. And a wave of public expectations, hopes, and ambitions has emerged that the federal government cannot ignore, as ignorance would not bring about the most enjoyable of political consequences.

In a number of regions, the considerable bustle of State Duma deputies, city mayors, and some deputy governors can be seen with the naked eye. There are also territories that are likely to have interesting tensions between acting governors and their predecessors. The attitude of the population toward these governors, set against the background of what has happened in the time since their predecessors, is considerably warm in many cases.

Where and when will the elections be held?

When the gubernatorial elections will actually begin continues to be discussed in terms of predictions and assumptions, as it remains unclear, as the bill becomes a law. And that date will affect the fate of specific regions.

Currently, the bill for the return of gubernatorial elections states that they will be conducted in accordance with the law “On Basic Guarantees of Electoral Rights and the Right of Russian Citizens to Participate in a Referendum.” This law establishes different dates. According to it, regular elections on the regional and local levels are to be held on so called “common election days.” That is, if the previous elections were held in the period ranging from 1 November to 1 April, the next ones are to be held on the second Sunday or March. If the previous elections were held at any point between 1 April and 30 October, they are to be held on the second Sunday of October. Accordingly, the legal requirement of “common election days” will result in the reduction or extension of the term of the relevant authority. Between February and March 2011, the law was amended to permit such term reductions and extensions by not more than half a year in order to allow the possibility of regional parliaments combining with federal parliamentary elections falling on different years. This was relevant in cases where the terms of regional deputies ended during the six months before or after the State Duma elections.

For regional legislative assemblies, the decision to call elections should be made no earlier than 100 and no later than 90 days prior to Election Day, although the time can be reduced by one third in the event of early elections. Thus, if the same procedure is to apply to gubernatorial elections, than for an election to be held in October, the electoral procedures should commence between late June and early July.

Proceeding from the “common election day” principle, this means that in order to hold elections in October, the new law should be adopted and should enter into force by June. Furthermore, the regions still need time to adopt their own election laws. It is also possible that there will be conflicts when, for example, gubernatorial authority in a given region has not yet expired, but under the current procedure the process of party candidate selection for presidential proposals has already begun. If, for example, the law is passed and enters into force in June, in Buryatia and the Leningrad oblast—where the power of regional leaders is set to expire in July—United Russia should have already made their candidate proposals to the president. A relevant clause should determine the fate of such “transitional” zones.

Special elections—held in cases of the early termination of power, due for instance to a mayoral resignation or to dissolution of the council—are exempt from the “common election day” requirement, as is the case with State Duma and presidential elections. Theoretically, although this is unlikely) this article of the law could be adapted, and the meaning could logically include governors, on the basis of the fact that they have been sworn in and have taken office for a strictly specified term. After all, with “conferred authority,” no extension or reduction of powers would have occurred.

Because of the fact that appointments can only be made 45 days prior to the term expiration, it is likely that Novgorod and Samara will be the first regions to participate in “common election day” elections. The gubernatorial terms in both are set to expire in August, which will allow for enough time to make these appointments after the law has passed. Kostroma, Amur, and Bryansk would then follow. If, however, the adoption of regulations aiming to create a “common election day” for gubernatorial elections is prevented, than only regions where gubernatorial powers would terminate no earlier than 100 days after the entry into force of the law will employ direct elections.

However, considering the rate of political and economic change in the country, there is a substantial likelihood that by then the gubernatorial election procedures will have changed from their current form. This applies to the possible special procedure for “national” regions, as well as other changes.

TENTATIVE SCHEDULE OF ELECTIONS UNDER THE NEW LAW ON DIRECT GUBERNATORIAL ELECTIONS IN SPECIFIC REGIONS IN THE COMING YEARS (ON THE BASIS OF PLANNED EXPIRATIONS OF GUBERNATORIAL POWER.)

Likely to be appointed in accordance with the current system of “conferred authority:"

Likely to be chosen by way of direct elections: