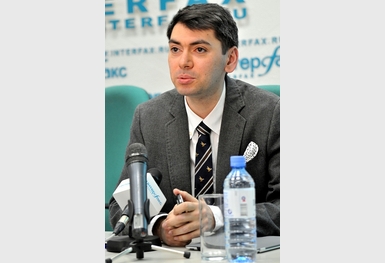 The showdown between the honest citizens and those who do not want anything to be investigated in Astrakhan has entered a new intellectual stage. Today the field where Shein’s supporters laid mattresses and attempted to set up camp was flooded with tons of hot water. It all stems from the fact that the officials were constrained from delivering their public speeches, and they felt that their only option was to send a signal to the citizens. It is my understanding that this is the signal they meant to send: guys, we are prepared for a new Bolotnaya Square. Get ready to defend your votes. The fact that they flooded the area with hot—rather than cold—water also probably contains a cryptic bureaucratic message that we have yet to understand.

And where are the people?

As it turns out, the struggle for justice and the Rule of Law provoked the arrival of troops from the capital. But tens of thousands of Astrakhanites who voted for Shein don’t care about their candidate or their votes? I don’t want to believe it. Between 200–300 people took to the streets for Shein. These numbers are insufficient to influence the government.

To be honest, I’m not surprised by the passivity of the Astrakhanites. First of all, there is the southern mentality. Secondly, a great many of these citizens are dependent on the government budget. Gazprom employees are afraid to voluntarily attend a rally. The fact that on 10 April the urgency of the situation in Astrakhan forced the administration to assemble an anti-Shein rally once again demonstrated its inadequacy and clumsiness in handling the situation.

Shein has always truly been a deputy of the people. The development of one scenario versus another depends on the actions taken by citizens. If everyone continues to sit at home, failing to figure out another way to participate, the likelihood of an objective investigation or a recall of the elections is almost nonexistent.

The health and survival of Shein and his colleagues lie exclusively in the hands of the Astrakhanites; not in the hands of Putin or Zhilkin. Putin has already stated, “Shein began the hunger strike and so far has not addressed the court. To be honest, it’s even weird.” This was said despite the fact that Shein was beaten this month for trying to obtain web-camera records in order to submit them to the court. During a meeting with Ponomarev and Gudkov, Zhilkin spoke about the possibility of a recall of the elections. Then later he publicly declared the fairness of the recent elections and rejected the possibility of a recall. Mayor Stolyarov has refused to resign for the purpose of a recall. In principle, Shein did not ask for a recall. He only wants fair proceedings to be publicly held.

The Pervom Channel news coverage of Navalny yelling, “We are here, authorities!” into a megaphone in the streets of Astrakhan—that was also Shein’s achievement. Astrakhan’s media outlets have maintained a stubborn silence, but the word of mouth works well and many are already aware of the situation.

Thanks to the Shein’s perseverance and Sergei Mironov’s support, Rostelecom has finally released a hard drive containing web-camera records, despite the fact that these records were previously reported missing. An application will soon be filed with the court. Mironov and Levichev flew into Astrakhan on the evening of 12 April for this purpose.

The first variation: In order to avoid publicly airing dirty laundry by way of investigating each polling station, Stolyarov could dodge any potential problems by stepping down as mayor. In that case, early elections will be called, probably for the autumn. In that case, the deputy chairman of the City Duma would perform mayoral duties for the time being. In this case, I do not think that Stolyarov would run another time, and Shein certainly would. But if this happens, United Russia will have to select another candidate. This variation may come to fruition if something smells fishy and there would be a risk of exposing high-level fraud. In this case, citizens will take bolder actions.

The second variation: After processing all of the video footage, Shein could appeal to the court, and the court could nullify the electoral results on the grounds that violations obscured detection of the true will of the voters. In this case, the court would nullify the results of about 30,000 polling stations. This variation is more resonant as it would require the courts to investigate all of the materials submitted, but it is also unlikely.

The third variation: Shein takes to the court. The court may decide to order a recount. In all likelihood, the results will be refined, but not the fact that Shein will need to win more than 60,000 votes in order to triumph. The situation is complicated further by the fact that the ballots are now located within the facilities of the concerned parties: the electoral commission and the administration. This is a very realistic variation.

The fourth variation: Citizens maintain their silence. The situation does not reach beyond sluggish legal proceedings, no recount will be held, no violations will be confirmed, and Shein’s demands will be refuse. This is another very realistic variation.
How Oleg Shein will conduct himself in any of these situations, only he knows. His strength is drying up by the day, and in certain instances his nerves are wearing thin.

Starvation in the name of fair elections is not limited to Astrakhan. In the Korkino district’s Roza settlement a hunger strike is being held inside the administration building. Is this really the time of such extreme measures?

I wish strength to Oleg Vasilevich and all of his companions. I am amazed by their perseverance and integrity!