Melkonyants: in order for the Astrakhan elections to be recalled, it must be proven that there were violations in 25% of polling stations 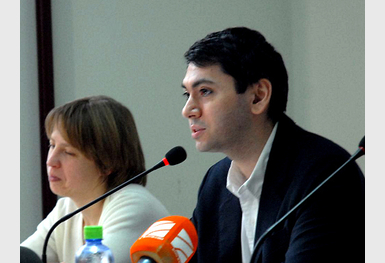 In order to resolve the political crisis in Astrakhan by way of a recall, A Just Russia representatives will need to prove in court that serious violations were committed in 51 of the city’s 203 polling stations during the course of the mayoral elections. According to GOLOS Association Deputy Executive Director Grigory Melkonyants, there is another solution to ending the crisis: early elections could be called upon the resignation of current Mayor Mikhail Stolyarov.

As reported by `Caucasian Knot`, a hunger strike was started on 15 March in Astrakhan in order to protest the results of mayoral elections held on 4 March. Participants in the hunger strike include former mayoral candidate Oleg Shein and his supporters. According to official figures, Mikhail Stolyarov won the elections. A Just Russia, however, refuses to recognize the legitimacy of these results.

Shein has stated that the hunger strike will end only after a decision has been reached on a recall of the elections.

Melkonyants told `Caucasian Knot` that a court may invalidate electoral results in the event that serious violations that would obscure the will of the voters can be proven to have occurred in no less than 25%of polling stations.

He was referring to Federal Law # 67, “On Basic Guarantees of Electoral Rights and the Right of Citizens of the Russian Federation to Participate in a Referendum.”

Melkonyants explained, “The law states that the court may decide to nullify the electoral results in a single polling station or fully invalidate the elections if the will of the voters cannot be determined; that is, if it is impossible to determine how many votes were cast for whom.”

Melkonyants does not consider the likelihood of such developments to be very high, however. He continued, “It is rare for courts to do this since it is always possible to recount the ballots. The courts will seek a recount of the stacks of ballots with the protocols that were received during the night.”

Mironov explained, «We randomly chose 17 polling stations, and the records of each demonstrate gross violations. We are submitting all of such instances as claims to the court. In order for a recall to be ordered, it is necessary to provide hard evidence of fraud having been committed in more than 51 polling stations, or 25% of the total number of polling stations. I have reason to believe that violations will be revealed in many more.»

Oleg Shein confirmed the same data earlier. He explained that specialists from Russia’s Central Election Commission (CEC) have viewed web-camera footage of violations that occurred at 17 polling stations. Later, however, CEC representatives stated that despite the fact that violations were committed during the Astrakhan mayoral elections, the CEC lacked grounds to initiate their nullification.

During a briefing held for Russian and foreign journalists on 11 April, Shein noted that “in 52 polling stations, no copies of protocols were issued at all” by electoral commissions.

On 10 April, the Astrakhan oblast prosecutors’ office reported that an audit of the elections led to the filing of five administrative cases. According to the prosecutors, only seven legal violations were discovered. Contrarily, Shein said that upwards of 300 violations were discovered during the course of the elections. He noted however that in Territorial Election Commissions (TEC) that used “electronic ballot boxes,” he received 5,900 votes, compared to Stolyarov’s 5,200.

“The complaint is ready and waiting to be saturated with material,” Shein said, noting that he would only file a lawsuit upon receiving video recordings of the polling stations. According to his calculations, this may happen on 13 April. Today, on 12 April, a Rostelecom courier is set to arrive in Astrakhan with hard drives containing all video footage. Shein noted however that the hunger strike will persevere even after he begins court proceedings.

During the 11 April briefing, Shein announced that the hunger strike participants will cease to strike given a specific scenario. "Aside from the courts, there is another mechanism provided for in “On Basic Guarantees of Electoral Rights and the Right of Citizens of the Russian Federation to Participate in a Referendum,” whereby the lower election commissions can consider complaints. This authority is established by Article 23 of the law. We are ready to work together with the CEC to view all of the video footage, polling station by polling station."

According to Melkonyants, another option that would lead to a recall of the elections would be the Stolyarov’s resignation. Melkonyants explained, “If Stolyarov resigns, without waiting until the completion of court proceedings, it is likely that early elections will be called.”

In his opinion, the likelihood of such a scenario will increase if the citizens of Astrakhan are active on this issue. Melkonyants said, “If citizens will actively participate in rallies and speak out about a recall, authorities may exert pressure on Stolyarov in order to call early elections.”

“We are not surprized by Vladimir Putin’s reaction.”

We note that before the 4 March election, Stolyarov served as the acting mayor of Astrakhan in the place of Sergey Bozhenov, who left his post on 17 January, after having been appointed by the governor of Volgograd oblast after Anatoly Brovko’s resignation.

By 5 March, Mironov had already asked Prime Minister Putin to pay attention to the events in Astrakhan. “The mayor they elected in Astrakhan was our Oleg Shein, based on the exit polls, but once again, hoolaginism is occurring there. Please be so kind as to give the command for them to play fair.”

However, Putin only spoke of the situation in Astrakhan on 11 April, during his address to the State Duma. He said that he lacks the authority to decide issues of the nullification of the Astrakhan mayoral election results, but stated that, “If these violations cast doubt on the results themselves, the court should decide accordingly to nullify them.”

Chairman of A Just Russia’s Astrakhan branch Control Commission Elena Grebenyuk, who has been participating in the hunger strike since 17 March, said, “We are not surprised by Vladimir Putin’s reaction to our activities. Although deep down, of course, we hoped that he would make a political statement that would give us grounds to stop the hunger strike.”

On 10 April, hunger strike participants conducted an unsanctioned street protest, which devolved into a class with Stolyarov supporters. Another protest is scheduled for 14 April.