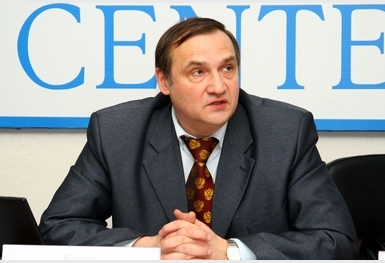 I participated today in public hearings on the elections in Syktyvkar. I referred to the hearing as a form of citizen self-defense against the state, which cannot seem to guarantee the electoral rights of its citizens. Another such form has now manifested itself in Astrakhan, and prior to that, in the cities of Lermontov, Yaroslavl (1 April,) and Moscow (4 March.) Clearly, none of these have been among the most radical forms of self-defense. And they have not been instigated by the US State Department, but by the Russian administration. They have been reactions not only to the actions of the electoral commissions, but to the lack of action by the bodies that are meant to protect electoral rights, including the courts, where the president, president-elect, and lower-level state officials are so fond of sending us.

Remember, the State Duma elections that were held on 4 December 2011 in Syktyvkar—and possibly throughout the whole of the Komi Republic—were crude. With particular cynicism, I would say they were rigged. As you will see below, we have specific and highly compelling evidence of such. This cynicism has a perfectly natural explanation: the third candidate on United Russia’s regional list for the Komi Republic was a former Republic Prosecutor, and is now State Duma Deputy V.A. Ponevezhsky. I find it difficult to imagine that if not for the influence of this or a similar sort of power, the election commissioners would have covered for these electoral issues at the time of the elections. Furthermore, it is difficult to believe that without such influence, the commissions or simply the Syktyvkar or Komi administrations would have so brazenly ignored the Criminal Code.

As an example, in the worst of times in Moscow, 10–20% of protocols corresponded. Now those numbers are up to 75%. At the same time, United Russia has been gaining votes in each polling station to a striking extent: from 400–500 on average to upwards of a thousand. PEC chairmen issued well authenticated copies of protocols to observers. In at least three polling stations, the counting process and the enlarged form of the protocol were recorded on video.

Criminal cases sometimes feature an aggravating circumstance, where an offense is referred to as having been “committed in a particularly cynical way.” This is exactly the case.

And what do you think? It is clear that the reaction to complaints were directed by the public prosecutor’s office. As expected, the reaction to the complaint launched by the Communists in court was as follows: sufficient evidence could not be found.

The Communists filed applications for information on eight PECs. The court held that information on six of these PECs could not be found; or rather that the original copies could not be found, but photocopies were presented. Properly authenticated information from the remaining two PECs was made available. The same situation occurred with a Yabloko court claim in Moscow. In actuality, the court made no effort to understand the case. The court’s decision did not contain a hint of desire to find truth in the court’s decision, although there were plenty of possibilities to do so: they could have investigated the original documents issued by the commissions, they could have requested more summary table formes, etc. This is the sort of court environment that the president would send us to.

Thus naturally, in order to bring truth to the Komi Republic, a public hearing is desperately needed. Hearings were staged today in an act of mob law. The results were four appeals: three similar appeals to the president, the president-elect, and the Chairman of Russia’s Investigative Committee; and one drafted especially for the Council of Europe Parliamentary Assembly (PACE.)

There is a sad side to this story, however. None of its characters want to take any of the blame. This explains why the parties do not have copies of the relevant protocols, which would provide their only option for contesting the elections in court. Maybe after a hearing something might change?

Address to the Parliamentary Assembly of the Council of Europe from participants in civic hearings, “Citizen observers on electoral violations in the Komi Republic.”

Dear members of the Parliamentary Assembly,

We would like to draw your attention to the fact that in Russia, a member of the Council of Europe, there may have been cases of mass fraud that have been met with impunity.

The electoral results for the Russian State Duma elections, which were held on 4 December 2011, were grossly falsified in the city of Syktyvkar, the capital of the Komi Republic. After the votes were counted, observers received copies of protocols from electoral commissions detailing the results of voting. The vast majority of these protocols were later changed in the city of Syktyvkar. In each such case, United Russia gained anywhere from a few hundred to over a thousand votes.

We have at our disposal evidence of falsification in 66 of the 85 electoral commissions in the city of Syktyvkar. This evidence consists of copies of the original protocols, video footage, and witness testimony. The total number of votes added to United Russia’s count in the city of Syktyvkar is estimated at around 32,000. Such large-scale electoral fraud could change the results of the election, and the distribution of mandates.

The falsification of electoral results or election documents is a criminal offense under Russian legislation. However, despite the obvious evidence of such, no investigation has been launched. This may be attributable to the fact that one of the United Russia candidates was formerly the Prosecutor of the Komi Republic, and is currently State Duma Deputy V.A. Ponevezhsky. During the course of proceedings initiated in March 2012 in order to dispute the totals of eight polling stations, the court failed to launch diligent investigations, exercised bias, and adopted an unjust decision.

Due to the active resistance of the relevant government agencies to investigating this electoral fraud in Syktyvkar, we are forced to resort to staging public hearings in order to allow voters to protect their constitutional rights. Participants in these hearings are currently appealing to President D.A. Medvedev, Prime Minister and president-elect V.V. Putin, and Russian Investigative Committee Chairman A.I. Bastrykin for protection.

Since Russia, as a member of the Council of Europe, is presently a subject of Parliamentary Assembly monitoring, we ask you to consider these facts when evaluating our country’s implementation of the Council of Europe’s recommendations, especially with regard to the Venice Commission’s Code of Good Practice in Electoral Matters. We further ask for the opportunity to contribute to the monitoring of the investigation of these facts.

Participants in the Hearing

To Russian President D.A. Medvedev, from a group of citizens of the Russian Federation

We are appealing to you due to our lack of hope for a just resolution of an issue within our republic, and due to the fact that the issue is directly related to the former Komi Republic Prosecutor and current State Duma Deputy V.A. Ponevezhskim.

On 4–5 December the offense described in S. 1, P. 141–141.1 of the Russian Criminal Code was committed in Syktyvkar. Election results and PEC protocols were falsified en masse. Considering the volume of these falsifications, the distribution of mandates among regional groups of United Russia’s federal party list could have been impacted. This widespread fraud may have increased the number of mandates received by regional group # 11, the Komi Republic. If there had been an honest vote count, Komi Republic Prosecutor V.A. Ponevezhsky, who was third on the regional part of the list, would not have become a State Duma deputy.

We believe that this total and cynical fraud occurred because its perpetrators were assured prosecutorial protection and protection from the relevant law enforcement agencies. Clearly, such a massive criminal offense could only have been committed by an organized criminal group which had conspired together beforehand. This offense is categorized as a crime against the constitutional rights and freedoms of citizens, and thus is of great social import and great danger.

The circumstances of this case are as follows:

The State Duma elections were held on 4 December 2011. Within the confines of the city of Syktyvkar, 85 Precinct Election Commissions (PEC) conducted voting. In accordance with the federal law, “On Basic Guarantees of Electoral Rights and the Right of Citizens of the Russian Federation to Participate in a Referendum,” (No. 67-FZ, from 12 June 2002) observers from political parties and the media monitored polling stations and obtained authenticated copies of protocols detailing the results of voting from the PECs. At two polling stations (PEC #64 and 53,) the counting process and the enlarged form of the protocol were recorded on video.
The data found on the protocols published by the State Automated System “Elections” differ significantly from that found on the copies of protocols obtained by observers. The protocols published by the “Elections” service were used to determine the official electoral results.

According to the copies of protocols received by the Communist Party’s campaign headquarters, there were significant differences in 66 out of 85 cases; in other words, in the vast majority of election commissions. The difference in the number of votes received by United Russia in polling stations ranged from a few hundred to upwards of a thousand. Approximately 32,000 votes were added to the to Syktyvkar’s total as a result.

According to the copies of protocols obtained by Civic Voice correspondents, significant differences (from 330 to 1,039 votes for United Russia) were found in 18 of 25 cases. The aggregated results of such changes in these 18 protocols accounted for a difference of about 11,000 votes.

A comparison of the video footage from PECs #64 and 53 indicate that the results of these two polling stations were falsified to a considerable extent. United Russia gained 658 and 432 votes, respectively.

There is also reason to believe that massive falsification occurred in other districts of the Komi Republic.

Considering that one of the candidates was the former Komi Republic Prosecutor, it is easy to guess why regional law enforcement agencies seem disinterested in solving these crimes. It is our understanding that the Komi Republic Investigative Committee has received implicit recommendations to refrain from registering appeals relating to the elections, and to forward all such appeals to the prosecutors’ office or the electoral commissions.

All of the evidence supporting the applicant’s claims were rejected. Contrarily, the evidence refuting the applicant’s allegations was critically evaluated, despite the fact that it was introduced by interested parties. Furthermore, it appears as though some of the applicant’s copies of protocols—necessary elements of written evidence—have been stolen. The court failed to conduct a comprehensive investigation and failed to examine the key evidence: the ballots, lists of voters, enlarged forms of protocols and summary tables, or registries of the issuance of copies of protocols. Furthermore, signatures on the protocols submitted by Territorial Election Commissions (TEC) were not subjected to handwriting analyses.

Considering all of this, there is reason to believe that the case will not be properly investigated within the Komi Republic despite glaring signs of criminality. There is also a danger of witness intimidation. Given the positions formerly and currently held by V.A. Ponevezhsky, it can be assumed that pressure can be exerted against any investigating authorities.

We believe that the brazen, almost ostentatious falsification of electoral results in Syktyvkar grossly violated fundamental provisions of the Russian Constitution and the electoral rigts of the majority of citizens and inflicted a serious blow to our country’s electoral institution. We believe that it is your responsibility to restore the violated constitutional rights and we hope that you will facilitate a complete investigation of these crimes. We ask you to take personal control of this investigation.