Astrakhan: What has happened and what should be done? 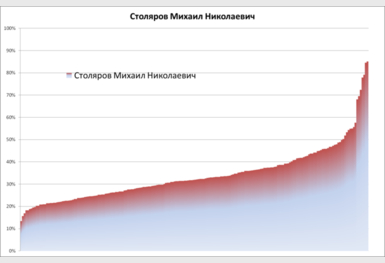 It is well known that the planet Neptune was discovered without a telescope, by way of calculations. Official published protocol statistics from all Precinct Electoral Commissions (PEC)—and even from all elections—provide a remarkable opportunity to assess the honesty and fairness of voting and counting processes without even requiring one to leave the house. Of course we are not dealing with Newton’s laws of motion here: there are no strict and conclusive variables. Certain things can, however, be seen with surprising regularity; or with high probability, if you prefer. This has become clear due to the correspondence of findings reported from the field (calls to the hotline, judicial complaints, court decisions, etc.) and the statistical analysis reported on such information.

For example, total fraud committed in Syktyvkar during the 4 December 2011 elections was introduced directly to the official statistics, and only then did copies of the protocols, video footage, and eyewitness accounts appear.

There are, however, exceptions: the republics of the northern Caucuses, including Chechnya, Dagestan, and Kabardino-Balkaria. Among these regions, statistical methods worked very poorly for one simple reason: the distribution of electoral indicators were, as mathematicians would say, degenerate. That is to say, the vast majority of commissions showed the same results for all indicators, such as it was in the Soviet Union. But this would also be the result if the elections had not occurred at all.

Thus an examination of electoral scandals must rely not only on testimony, but on official statistics as well. Naturally, this was done with the mayoral election in Astrakhan. It is now obvious that gross violations occurred during this election, namely to the principles of openness and transparency. In many cases the rights of observers were violated, and the elections were replete with statutory violations of the vote counting process. Oleg Shein’s hunger strike seems to have at last compelled the verification of even the CEC members.

Not unreasonably, the CEC notes that procedural violations are not inevitably conclusive of an incorrect account of cast votes. Here though, the CEC is playing the fool, pretending that it does not understand—although maybe it really does not understand—that Shein insists upon a recall of the elections on the basis of comprehensive violations of the prescribed legal procedures, and not on the basis of comprehensive fraud. And this insistence is correctly placed: for comprehensive procedural violations, the correct solution is to simply nullify and recall the elections. Otherwise, real elections will never be achieved.

Moving on to Astrakhan’s statistics: tables detailing both Astrakhan’s presidential and mayoral election protocols were received on 4 March. The table containing the presidential data features 204 PECs. The table containing the mayoral data features 202. One of these contains absolutely no data, so we submit the results of the analysis of 201 PECs.

First, as always, we look at the distribution of PECs according to administrative candidate, to see if there were any unexplained gaps: (TEXT: Mikhail Nikolaevich Stolyarov)
Fair enough. The sharp rise on the right side was caused by the presence of “closed PECs.” This sample does not consider December 2011 in Magnitogorsk: (TEXT: United Russia)
Then we look at the Sobyanin-Suhovolskiy test. If you are unfamiliar with this, please refer to the book I wrote with Arkady Lyubarev, Crime Without Punishment, or to the relevant GOLOS reports. (TEXT: Sobyanin-Suhovolskiy test of the 4 March 2012 mayoral elections in Astrakhan)
Not perfect, but fair enough. There are no grounds for suspicion here.

Next we look at the distribution of PECs by percentage of votes outside of the premises and by invalid ballots, in one percent intervals: By combining the elections, it is possible to compare the protocols of the same commissions on the presidential and mayoral elections. But this raises a question that was likely not answered within the PECs, as is usually the case in all of our combined elections. The question is: should the commissions issue a mayoral ballot to absentee voters? The law on this issue has not been settled. It would be wrong to give every absentee who arrives a mayoral ballot, but it would be unfair not to give such ballots to Astrakhanites. What should the commission do in this case? They act according to their own discretion. And this discretion shows in the comparison of the protocols. (TEXT: Difference between the number of presidential and mayoral ballots issued minus the number of voters with absentee ballots)

This offers much to think about, but first and foremost this picture may indicate that some polling stations received almost no mayoral ballots. See the right side of the graph. The “continuous cycle companies” about which so much was written after the presidential elections could have accounted for this. But the results of the mayoral vote would have little impact in this case, because they did not even vote in the mayoral race.

Another conclusion that can be drawn from this picture is the inaccuracy and lack of unity shown in calculating the lists of voters. But that is still another problem.