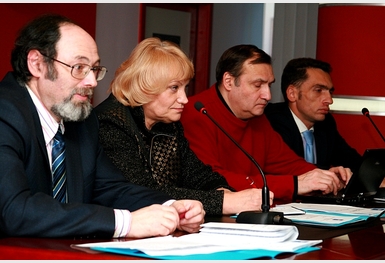 GOLOS Association has sent letters to Chairman of the Central Election Commission (CEC) of the Russian Federation Vladimir Churov and to Minister of Communications and Mass Media (Ministry) Igor Shchegolev. In these letters, GOLOS Executive Director Lilia Shibanova requested disclosures from Churov and Shchegolev of the plans of the CEC and the Ministry respectively with regard to the future use of web cameras in Russian elections. If it is the case that web cameras will no longer be used in all subsequent elections, Shibanova has requested an explanation of the reasons for such.

The letters further stated that, "[t]he implementation of the program to install web cameras… required considerable public resources and the efforts of many people. These resources and efforts laid the framework for the further development of the electoral institution in our country… It would be highly unjust—on might even say it would be criminal—if the experience gained and the resources spent are not utilized in future elections." GOLOS offered its assistance in developing regulations on the use of web-cameras in the higher-level election commissions, and drew attention to the rights of citizens to access the archived video footage.

It is well known that the use of video cameras during the voting and counting processes in the 2012 Russian Federation presidential elections improved electoral openness and transparency and significantly enhanced the possibility for Russian citizens to gain an understanding of what goes on at the polling stations during the vote count.

The implementation of the program to install web cameras, which was launched by the President-elect in an effort to increase confidence in the Russian elections, required considerable public resources and the efforts of many people. These resources and efforts laid the framework for the further development of the electoral institution in our country, thus increasing confidence in the elections and conducting them in greater adherence to the principles established by the Russian electoral legislation. It would be highly unjust—on might even say it would be criminal—if the experience gained and the resources spent are not utilized in future elections.

We believe that the use of web cameras should be extended to all elections and referenda within the Russian Federation. We also believe that the experience gained during the 4 Match 2012 elections should be carefully analyzed, with particular regard to their shortcomings. Thus, failure to comply with the regulations on the installation and re-installation of web cameras (see: Central Election of the Russian Federation Decision # 102/818–6, 16 February 2012) should be carefully analyzed, with attention paid to the details on video and audio recordings.

At this time it appears that there are no practical obstacles impeding the implementation of the broadcasts and—most importantly—the rendering available of such to the Russian citizens. The full cycle of the voting, counting, and recount processes in the vast majority of Precinct Election Commissions should be made available by way of these broadcasts.

Furthermore, it does not appear that the implementation of the broadcasts of video footage summarizing the results of all election commissions immediately higher than the Precinct Election Commissions would require significant additional effort. GOLOS Association can contribute to the development of the regulations on the use of web cameras in these commissions.

It is our understanding that the web cameras used to monitor the electoral processes have been dismantled and are not currently being utilized for the majority of elections.

In connection with the above discussion, we request that you disclose the Central Election Commission’s plans with regard to the use of web cameras in the elections of the Russian Federation. If it is the case that the Central Election Commission does not intend to utilize web cameras for all subsequent elections of the Russian Federation, we request that you please explain your reasons.