Awaiting the Next Revolution 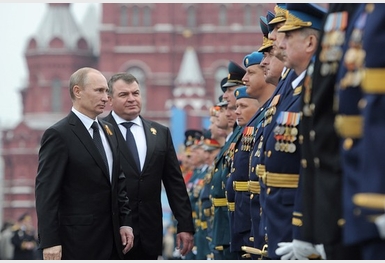 Russia is a country in which the population has no respect for the political system, their rulers, or the distribution of property.

The violence that accompanied the inauguration of Vladimir Putin as Russian president this week is an ominous sign that Mr. Putin’s apparent desire to rule for life is leading his country toward a dangerous political confrontation.

Initial demonstrations following last December’s fraudulent Russian parliamentary elections were cheerful. Crowds of more than 100,000 kept to agreed meeting places and routes and even thanked the police for showing restraint. On the eve of this Monday’s inauguration, however, police made 450 arrests and attacked demonstrators with batons, sending at least 17 people to the hospital. More than 20 police were injured by debris and beer bottles thrown by protesters.

Dmitry Peskov, Mr. Putin’s spokesman, said he regretted that the police had not behaved more harshly. But harsh treatment may do little to shore up Mr. Putin’s dwindling support. Rising prosperity had until recently obscured the fact that Mr. Putin and a small group of cronies control an estimated 10%-15% of Russia’s gross national product.

Officially, Mr. Putin was elected president on March 4 with 63.8% of the vote. But a count carried out by the Golos Association, a Russian nonprofit founded in 2000 to protect the electoral rights of citizens, showed that the real figure was 50.75%. Even this could not have been achieved without banning many opposition candidates and putting the entire government at the service of Mr. Putin’s campaign. In the Dec. 4 parliamentary elections, the pro-Putin United Russia party, which claimed to win a majority of seats, only received 30%-35% of the vote, according to Golos.

Under these circumstances, neither Mr. Putin’s supporters nor his opponents can take the political process seriously. In an effort to defuse the protests, then-President Dmitry Medvedev agreed to a number of political reforms after the December parliamentary elections. The most important was the direct election of governors. But in each region, candidates must collect signatures from 5%-10% of the municipal legislators or mayors, a serious problem outside of Moscow for opposition candidates. Before leaving office, Mr. Medvedev also replaced 13 governors in politically independent regions, removing those seats from political competition for the next four of five years.

One new law regarding political parties gives legal status to opposition parties but prohibits coalitions, making it impossible to form a unified opposition. Mr. Medvedev signed a decree on April 17 establishing a supposedly independent television station, but the director will be appointed by the president.

Some democratic activists are working to achieve political power at the local level. Others may decide the best way to fight a pseudo-democracy is in the streets.

Another problem bred by Mr. Putin’s rule is a deteriorating economy. Crude oil and gas account for 75% of Russia’s exports. In order for him to win the presidency, Mr. Putin’s government authorized $161 billion in additional spending through 2018, increasing pensions and freezing gas prices. As a result, the government needs an oil price of $150 a barrel over the next few years to break even, while a sharp fall in price (for example to $80 a barrel) could lead to an immediate crisis.

Corruption, especially of this magnitude, has its consequences. Investors do not invest in a country with no rule of law. In September 2010, Russia’s capital account went into deficit, the result of lagging investment and capital flight. How much capital flight? According to Sergei Guriev, dean of Moscow’s New Economic School, in net terms Russia is losing between $7 billion and $8 billion of capital every month, equivalent to 5% of its monthly GDP.

Finally, Mr. Putin’s rule has led to rising nationalist extremism. During the election campaign, Mr. Putin accused the West of meddling in Russian affairs, saying “The battle for Russia continues and we will win!” It was not clear who he was battling or what he expects to win, but such rhetoric provides emotional support for the nationalist movement in Russia.

Under Mr. Putin, radical nationalists have attacked dark-skinned foreigners on the streets of Russian cities with impunity. In 2006, 13 people were killed in a bombing of Moscow’s Cherkizovsky market, where the traders were mostly from the Caucasus and Central Asia. With the violence threatening to slip out of control, the authorities began to arrest neo-Nazis and skinheads, but there’s been no attempt to combat their xenophobic worldview. Some fascist groups are now saying on their websites that it’s not enough to attack "Tajiks"—the time has come to attack the system.

In the face of all this, Mr. Putin has made attempts to endow himself with new legitimacy. In recent years, he’s been filmed riding a Harley-Davidson, singing the 1950s hit “Blueberry Hill,” and photographed riding a horse bare-chested. One of his aides said he believed that Mr. Putin was sent to Russia by God, and the Russian media reported that a small female sect believes that Mr. Putin is the reincarnation of the Apostle Paul.

None of this, however, is likely to protect the Putin regime from the challenge it now faces. Russia is a country in which the population has no respect for the political system, their rulers, or the distribution of property. It is also a society assaulted with tendentious information not only by the rulers but by some of those in opposition.

In the best of all worlds Mr. Putin would resign, and free and fair elections, with nonpartisan monitors, would be held. But even that would not be enough. Russia needs a commission similar to the South African Commission on Truth and Reconciliation to review publicly not only the crimes of the Putin era but also crimes committed during the eight-year rule of his predecessor, Boris Yeltsin. Only this can provide a basis for democracy.

Sadly, no such accounting is likely in the short run, which is why the stage is now set for a struggle over Russia’s future in which neither side can be confident of success. What’s at stake is not just the country’s prosperity but its existence as a civilized society.

Mr. Satter is the author of “It Was a Long Time Ago and It Never Happened Anyway: Russia and the Communist Past,” (Yale University Press, 2011). “Age of Delirium,” a documentary film about the fall of the Soviet Union based on his book of the same name, was also recently released.

A version of this article appeared May 11, 2012, on page A13 in some U.S. editions of The Wall Street Journal, with the headline: Awaiting the Next Revolution.