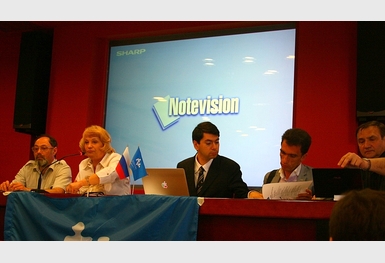 GOLOS Association’s General Assembly was held on 19–21 May in Moscow. Conference participants included regional representatives as well as Association experts.

The results of monitoring efforts during the federal election cycle were summarized, and incredible facts from the regions were discussed.

GOLOS Executive Director Lilia Shibanova presented projected plans of the Association’s activities over the course of the next two years.

Among these plans included, “Kinogolos,” a method of discourse based on film screenings. To serve as an example, the Assembly was shown the film, “Astrakhan. Hunger Strike.”

GOLOS Deputy Executive Director Grigory Melkonyants and project manager Ksenia Sokolov worked with groups on “Your Deputy,” a project aimed at the monitoring the activities of members of parliament.