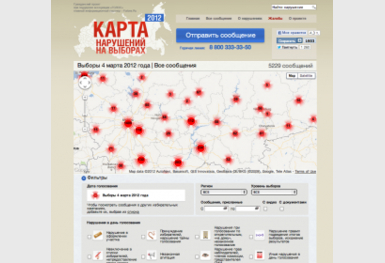 Golos, a long-time partner of NDI in Russia, was awarded the prestigious Sakharov Prize of the Norwegian Helsinki Commission today. The Commission especially lauded Golos for its innovative work during the recent Russian legislative and presidential elections. Golos, Russian for “The Voice”, is the only independent election monitoring organization in Russia. It has worked for over a decade on independent domestic election monitoring but became extremely popular during the recent Duma and then Presidential elections for its interactive map that allowed citizens to report violations during the election period and on election day. These elections were marked by the savvy use of Russians of social media and camera phones to record and report election violations on YouTube and on Golos’ map.

The map became one of the 25 most-visited sites in Russa at the time, noted the Commission. Shortly after launch, the site was removed from Gazeta.ru where it had been published, Golos director was detained, and the organization was fined multiple times. Golos was accused of collaborating with Western agents and a slander campaign was launched against the organization on state media.

In July of this year, the Russian Duma adopted a new NGO law that required those organizations engaged in political activities and those receiving non-Russian funding to register as foreign agents with the government. Golos popularity was attributed to have contributed to this crackdown against Russian NGOs. The organization is now facing an uncertain future; especially worrisome as there are important regional elections coming up later this fall and early next year.

The Sakharov Prize was established by the Norwegian Hesinki Commission in 1980 to support those who have been detaine or otherwise persecuted for their beliefs.

We are enormously proud and grateful to be able to have worked with Golos and congratulate them for this well-deserved recognition of their work.