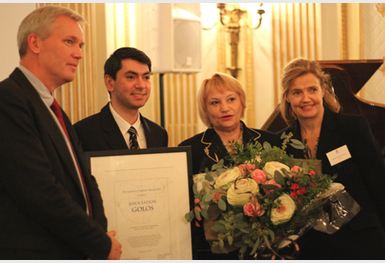 Russian Association ‘Golos’ was presented the Sakharov Freedom Award at a ceremony which also marked Norwegian Helsinki Committee 35 years’ anniversary on 23 October. Lilya Shibanova accepted the award on behalf of the organisation she leads. — It is a great honor to receive the Sakharov Freedom award. The recognition comes at a very important and suitable time for us, were Russian democracy is dwindling and organisatons like ours are under fierce attack from the authorities. The anniversary was also celebrated by a well attented seminar opened by Foreign Minister Espen Barth Eide.

Golos receives the award for its outstanding efforts to promote democratic values through free and fair elections in Russia,

Golos («Voice») is the only independent organization which conducts nation-wide election observation in Russia. The organization is known for systematic, efficient and sophisticated methods of monitoring electoral processes in Russia. Particularly in relation to Duma elections 4 December 2011 and the presidential election 4 March 2012, the organization played an important role when, in collaboration with the newspaper Gazeta.ru, they employed modern technology and published an interactive website that could upload reports on violations from the public. Golos received warm greetings from Chair of the Standing Committee of Foreign Affairs of the Norwegian Parliament Ine Marie Eriksen Søreide as well as from the Government.

- Although Russia’s road is not straight forward or easy, but often difficult and full of setbacks, we believe that the efforts of Golos and its friends sooner or later will result in Russians having a real choice and a real voice in their own affairs, NHC Chairperson Ragnhild Astrup Tschudi said when presenting the award.

Evgeniy Zhovtis
Evgeniy Zhovtis, the 2010 Sakharov Freedom Award recipient, was imprisoned in Kaskhastan when he received his award, was now able to be present at the ceremony. He focused his speech on Ales Bialiatski, 2006 recipient, who currently serves a 4,5 years prison sentence in the hands of the dictatorship of Belarus.

The seminar ‘Democracy challenged – How to counter erosion of democratic rule?’ took examples from the negative developement of democracy in Russia and Hungary as discussed ways to overcome the democratic backslide.

Espen Barth Eide
Norwegian Foreign Minister Espen Barth Eide opened the seminar and outlined many of the current challenges against democracy worldwide. Nevertheless, he reminded the audience of some of the achievements made during the NHCs 35 years of activity: short enough for most of us to remember, but long enough for dramatic changes to occur: End of the Cold War, fall of the Berlin wall, collapse of the Soviet Union, the rise of China and Asia and the Arab Spring. And let’s not forget that all these changes, including human rights progress and spread of democracy, do not happen on a meta-level, above us. No, they happen because of us, because of individuals, civil society, governments, people who want to see a better tomorrow.

-The Norwegian Helsinki Committee is such an actor. 35 years of supporting civil society, monitoring elections and reporting on human rights achievement. Of campaigns and hard-fought victories against human rights violations, prejudice and ignorance, against injustice and repression. Your work is impressive. Not always popular. But as important today as it was during the Cold War, the Minister said.