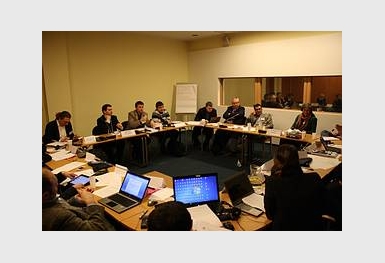 Warsaw — On 12th December 2012, twelve civil society organisations supporting or conducting citizens’ election observation in the states of the Eastern Partnership, the Russian Federation and the European Union have launched the “European Platform for Democratic Elections” (EPDE) in Warsaw.

“The support of citizens standing for democratic elections wherever they are at risk in Europe is our common aim and responsibility” said Stefanie Schiffer, chair of European Exchange (Berlin) and newly-elected coordinator of the Platform. Whereas all six countries of the Eastern Partnership of
the European Union (Armenia, Azerbaijan, Belarus, Georgia, Moldova, and Ukraine) and the Russian Federation have committed themselves to the principles of electoral democracies through their constitutions and international obligations, today none of these states fully meets the standards of democratic elections.

“Election fraud has become a common tool for some of the post-Soviet
countries to preserve power. The poorest records belong to the European Union’s immediate neighbour states, Belarus and the Russian Federation, as well as Azerbaijan.”

The first activities of the European Platform for Democratic Elections are directed towards supporting citizens’ observation during the upcoming presidential elections in 2013 in Armenia, Azerbaijan and Georgia, as well as towards the regional elections in the Russian Federation and in
Ukraine.