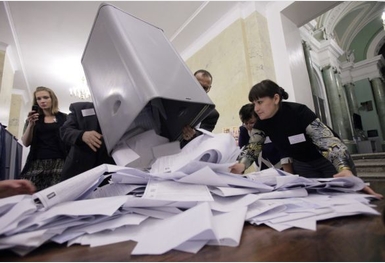 A presidential election in Russia isn’t scheduled for another five years, but the people who will run the polling stations and count the ballots are already being selected.

Regional elections officials have until April 30 to form more than 90,000 local elections commissions nationwide — one for every polling station — whose members will serve five-year terms under a new law that elections watchdogs said is designed to protect the ruling party.

Even one honest commission member is enough to “jam the vote-rigging machine,” said Roman Udot, head of monitoring at Golos, a nongovernmental elections watchdog.

Golos is one of several groups that have recruited thousands of volunteers to serve on the commissions, which have traditionally consisted of state employees and members of government-friendly civic groups handpicked for their loyalty, not for their democratic scruples, Udot said.

The new recruits, energized by the past year’s pro-democracy movement, which the 2011 election scandal helped to spark, will be placed on commissions mainly via the Communist Party and A Just Russia, parliamentary parties with the right to one spot on each commission.

As commission members, they’ll have access to voting documents as well as more clout than an observer, a significant number of whom said they were shooed away from polling stations during the Duma elections.

They can also influence other commission members, refuse to certify election results and offer dissenting opinions that can be used to challenge vote tallies.

Due to the new five-year rule, commissions selected in the next few months will administer Duma elections in 2016 and the presidential election in 2018 as well as gubernatorial and other local races.

Close attention will likely be paid to city legislative and mayoral elections in Moscow, expected next year and in 2015, respectively, given the particularly fervent opposition activism in the capital.

Georgy Alburov, of the opposition election-monitoring group Rosvybory, said he expects enough volunteers to cover every one of Moscow’s 3,400 voting stations.

“Recruitment is going well,” he said. “It’s picking up as the late-January deadline approaches. People are waking up and are ready to register.”

Alburov, a member of the opposition Coordination Council, is also a close ally of Kremlin foe Alexei Navalny.

The window for applicants in the Samara region, for example, was from mid-December to mid-January, closing before Russians officially returned to work.

Recruitment appears to be going less well outside Moscow and other major cities, with even major parties saying they likely won’t be able to cover many polling stations.

The Communist Party will recruit enough people to cover only 75 percent of commissions nationwide and only 20 to 30 percent in regional centers and villages, said Vadim Solovyov, a senior party official, Kommersant reported last week.

A Just Russia’s Mikhail Yemelyanov was more optimistic, telling the newspaper that his party will cover all local commissions, excluding those in several regions, including the North Caucasus.

Incidentally, the ruling United Russia party’s overwhelming victory in several regions in the North Caucasus — it officially won more than 99 percent of the vote in Chechnya, for instance — raised eyebrows and sparked local protests.

“People are afraid that the commission will be a lot of work, although in reality, commissions are only active just before elections,” Ilya Mishchenko, head of training at vote monitor Citizen Observer said, explaining why some activists have been discouraged from volunteering.

More than 1 million people will be selected to serve on the commissions, whose average size is about 12 members, from a pool of nominees submitted by parties and local administrations.

Dozens of political parties that registered in the wake of last year’s political reforms, which made it easier to create new parties, are not entitled to place representatives on the commissions.

Video clips purportedly showing local elections officials committing infractions that ranged from minor violations on vote tally sheets to outright vote-rigging, caused outrage when they surfaced during and after Duma elections in December 2011.

A recent study by U.S. and Russian academics published in the Proceedings of the National Academy of Sciences, a U.S. academic journal, concluded that United Russia’s official results in Moscow, 47 percent, were 11 percentage points higher than its actual haul.

Ultimately, the stated goal of Golos, Rosvybory and other recruiters is to instill integrity in the electoral process.

“For the time being, our task is to, at the very least, weaken the wave of falsifications, when people have become so unused to the idea that they can choose something that they A) don’t vote, B) don’t run for office and C) don’t donate money to political campaigns,” Udot said.