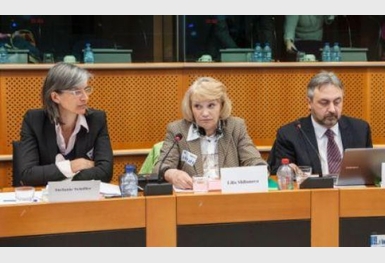 The Association GOLOS and other leading Russian NGOs have been declared „foreign agents“ in the past few weeks and are facing now to be shut down. On May 15th in the European Parliament in Brussels a public discussion on the crackdown of the Russian civil society was held on invitation of Werner Schulz. MEP, Green Faction.

Lilia Shibanova, Association GOLOS, Yuri Dzhibladze, Centre for the Development of Democracy and Human Rights, Stefanie Schiffer, European Exchange, Michael Pulch, EEAS and Jean Louis Ville, European Commission, discussed the actual situation, which emerged with the massive application of the Russian NGO law “on foreign agents” and the possible reactions by the European Institutions. The participants agreed that the crack-down on Russian civil society organisations is of highest priority for the EU–Russia relations, that the ongoing pressure on Russian NGOs is contradictory to Russia’s international obligations in the framework of the Council of Europe, the UN and the OSCE, and that the European Institutions would assess all legal opportunities how to further support the oppressed Russian civil society in the new difficult circumstances. The upcoming EU-Russia summit in Ekaterinburg on June 3–4 represents an important opportunity for the EU to raise these concerns directly with the Russian leaders. The Association GOLOS, Russian founding member of the European Platform for Democratic Elections has been declared “foreign agent” and is facing its closure.

Lilia Shibanova, Director Association GOLOS will be in Berlin and will be available for press interviews on Friday May 17th. Contact: +49 171 9945540.

See here for english version of the EPDE statement (pdf).