STATEMENT # 3 OF GOLOS ASSOCIATION ON THE RESULTS OF SHORT-TERM MONITORING OF PRESIDENTIAL ELECTIONS ON MARCH 2, 2008

STATEMENT No. 2 of “GOLOS” Association

STATEMENT No. 2 of “GOLOS” Association on findings of long-term observation of the 2008 Presidential campaign (Period of political agitation)

Press-release: Russian Electoral Norms as “Black Box” in Contrast With the Transparent and Open Electoral Procedures in Georgia and Kyrgyzstan

“GOLOS” finds Russian Election Law in need of substantial improvement and, based on its international election monitoring experience, initiates a series of expert discussions of Russian electoral procedures in comparison with those of other countries. As the result of these discussions a number of electoral norms and procedures optimal for Russia should be developed in order to be lobbied later for inclusion into the Russian Electoral Code.

Preliminary conclusions based on results of observation during the Election Day

Around 2500 activists of «GOLOS» Association have been observing voting procedures on over 20 000 polling stations in 38 Russian regions starting from 8 am until the counting of votes was over and final protocols were signed. «GOLOS» was also analyzing messaged received through its hot-line Transparent elections, which were coming throughout Election Day. If citizens left their contacts then, on their permission, «GOLOS» recorded an interview with them and with more detailed information on reported violations. «GOLOS» was also informing the CEC about the most systematic and serious violations through operators of hot line run by Russian Foundation for Free Elections.

Statement No. 3: DEVELOPMENTS OF THE CAMPAIGN AND CHANGES OF THE PARTICIPANTS OF ELECTIONS

GOLOS Association is implementing a long-term monitoring project of the State Duma elections starting from July 2007 up to elections day scheduled for December 2, 2007. Receiving information from correspondents of “Grazhdansky Golos” (Civic Voice), a newspaper founded by the Association, and its activists the monitoring covers the following 40 Russian regions

Announcement: On the 2nd of December in the Independent Press Center (Moscow) “GOLOS” Association will organize a 24-hour Informational Center “The Voice of Elections”.

Press-conference announcement: “Electoral campaign at the finish line: peculiarities of the political agitation and the use of administrative resource.”

On 28th of November, 2007, at 2 pm in the informational agency “Rosbalt” “GOLOS” Association and Transparency International-Russia will hold a joint press-conference on the results of election monitoring:

“Electoral campaign at the finish line: peculiarities of the political agitation and the use of administrative resource.” 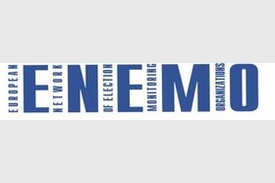 ENEMO supports OSCE/ODIHR decision not to observe Russian State Duma election European Network of Election Monitoring Organizations – ENEMO express its support for the decision of OSCE Office for Democratic Institutions and Human Rights (ODIHR) not to compromise its election observation methodology and therefore not to observe the 2 December elections to the Russian State Duma.

Samara: recent developments (as of Nov. 20)

The pressure on “GOLOS” in Samara started in Мay this year and it is exerted from different directions and by various governmental organisations starting from Department Against Economic Crime and ending up by Russian Registration Service.

Human Rights Consultations on the Prosecution of NGO “GOLOS” in Samara

On November 14, 2007, at 13.00 in the Independent Press-Center (Moscow, Prechistenka street, b. 17/9, office 44, 1st floor) human rights activists, legal experts and public opinion leaders will review the case of blocking the activity of Samara “GOLOS” Association office, the organization which attempted to organize independent election monitoring in the region. All media representatives and partner organizations are welcome to attend.

Press-release: Problems and Trends of the Electoral Campaign to State Duma 2007

Problems and Trends of the Electoral Campaign to State Duma 2007

On October 31, 2007 at 12.00 in Informational Agency Rosbalt (Moscow, Skaternyi per. 4/2, p.1) Transparency International-Russia together with “GOLOS” Association will hold a press-conference on findings of long-term observation and monitoring of the administrative resource.

STATEMENT No. 2: Nomination of parties’ lists and beginning of political agitation

NOMINATION OF PARTIES’ LISTS AND BEGINNING OF POLITICAL AGITATION